Let's give Ryan some love, his movie Not Suitable for Children looks to be good. This is from the movie's Facebook page- Opening Night at Sydney Film Festival is already SOLD OUT! However, tickets are now on sale for a second and last SFF screening of the film on Saturday the 9th of June...

The webseries "Jan" with Stephen Moyer has the behind the scenes videos up as well as new episodes.  You can watch them all HERE

I saw this Savoy ad last night while in my insomniac rattlings, just remembered it now.

Thanks to Lensinthesky for tweeting this pic, in in NYC Times Square.

Skarsgardfans has this pic from the summer issue of Bullet Magazine, they tweeted it.

There are many more photos on twitter, tumblr and blogs from New Orleans of the filming last night. Thanks to all the fans who have spread the joy, I am still so happy to see Denis back as Russell. If you see your photo I will credit you if you let me know, this one for instance is from Tumblr and was reblogged from  Melinnis. Swedish Meatballs on Tumblr has more. I thought this was a joke but peeps are saying it's scripted (?).

Source Wanda is my new hero, wait all of you are for sharing on twitter.

Above is from Mac, what the hell is going on, several photos (some posted yesterday) show them all fanged out and where is Pam?

Issue 4 of the ongoing comics is available to pre-order at HBO-Alan Ball’s hit HBO series continues its ongoing comic tale. Learn what happened to your favorite characters on the night vampires revealed their existence to the world, with this issue focusing on ALCIDE! Co-Written by Michael McMillian, “Steve Newlin” from the show, with fan-favorite Ann Nocenti (Daredevil, Green Arrow)! Series features covers by Tim Bradstreet (The Punisher)! 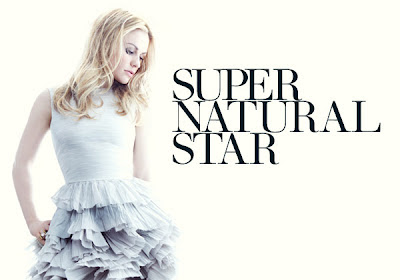 Canada's Fashion Magazine has the Anna Paquin article up, here's a tidbit.
You can learn a lot about an actress by the way she steps on set for a photo shoot. Some stars require the armour of an entourage; others need a personality-devoid space and monastic silence. Anna Paquin is unquestionably neither of the above. Upon arriving at L.A.’s Smashbox Studios on a scalding Saturday afternoon, the Winnipeg-born, New Zealand-raised actress introduces herself to the FASHION crew without hesitation. Serving up a warm, Kiwi-accented “Nice to meet you” to photographer James White—and his troop of all-guy assistants crushing on her—the 29-year-old talent does the rounds as if she were hosting a cocktail party.
“At the end of last season, Sookie told all those dudes to back off because she needed to be by herself,” Paquin says. “She’s trying very hard to stay true to that goal of independence, of not being his or his or his…and she’s trying to figure out her own life on her own terms without anyone there to catch her every time she falls. Things will be especially complicated with her and Alcide, since Sookie just shot the head off the former love of his life!”
Apart from the gunslinging and the ultra-steamy love triangles, Paquin says she does make parallels between her own life and Sookie’s so that her performances remain fresh. “There have always been aspects of her that I connect to, empathize with and understand—that’s the only way I can approach my job,” she says. “You have to find a common ground with any character. I spend a lot of time with scripts, looking for my truth.”
Another way Paquin conjures up her True Blood protagonist is by exploring HBO’s vast wardrobe department. “For me, costume is a great key to the character,” Paquin says. “What you wear is a pretty big reflection of your personality. Part of True Blood is told through Sookie’s clothes.”

Odd and Sods of Interest